More old AD&D stuff -- this time some Stone Giants.  I think these guys are from sometime in the 1980s.  The figures were already painted.  I just did minor touch-up where there was some chipping.

The client wanted these giants put on rocky, 60mm square scenic bases.  I originally thought the bases might be a bit large, but maybe that's because I am used to Warhammer Fantasy and the like where the mini takes up almost all of the base.  In the end, the larger bases ended up looking like small dioramas, and I think they are really cool.

I started with plain, 60mm square bases (custom-ordered from Litko) and built them up with stones and filler so they bended seamlessly with the integral bases on the models.  The bases were brush primed and painted so that the original paint would not be compromised. 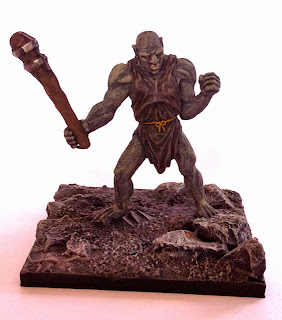 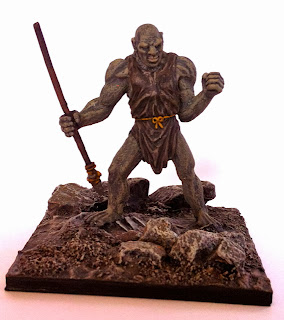 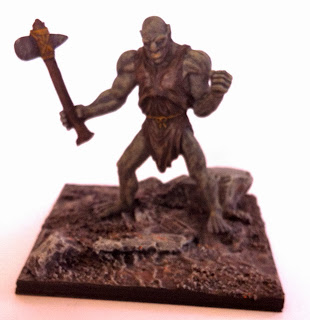 Posted by Circle City Miniatures Studio at 8:38 AM No comments:

Here are more old-school, Ral Partha AD&D minis I painted for a client.  They are Gibberlings--an obscure monster that originally appeared in the Fiend Folio.  They seem to be based on the idea of Morlocks from The Time Machine, and to my knowledge, they never had a starring role in any of the old modules.

Like all the old Ral Partha stuff, these guys are pretty small.  The arms did not come attached, but had to be glued on.  It's nice for purposes of varying the position of the models, but there is a noticable gap that had to be filled with putty.  The figures were glued to some 25mm square bases, which were then textured to blend smoothly into the integral bases on the models.

Here are a couple shots of a single Gibberling: 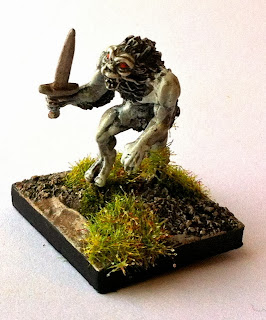 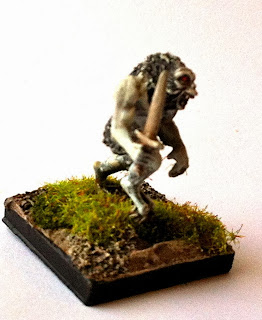 And here are some group shots (there are 24 in all): 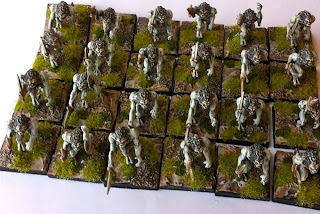 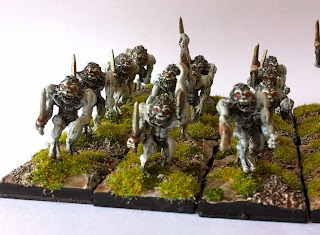 Posted by Circle City Miniatures Studio at 11:06 AM No comments:

I've had these guys sitting around for ages, originally supposed to be part of a commission job that fell through.  Decided it was about time to paint them up and put them on eBay. 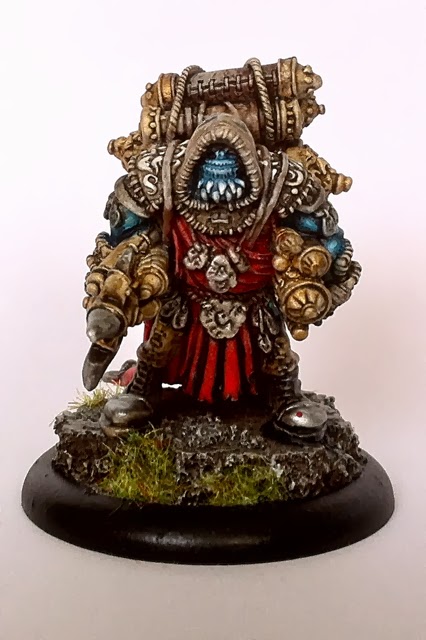 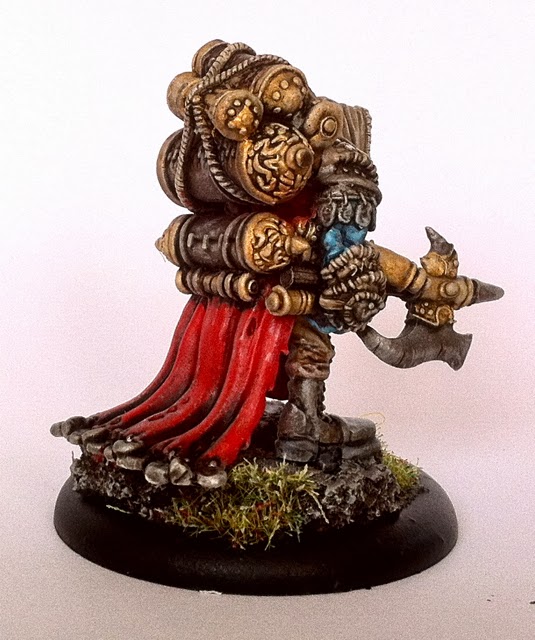 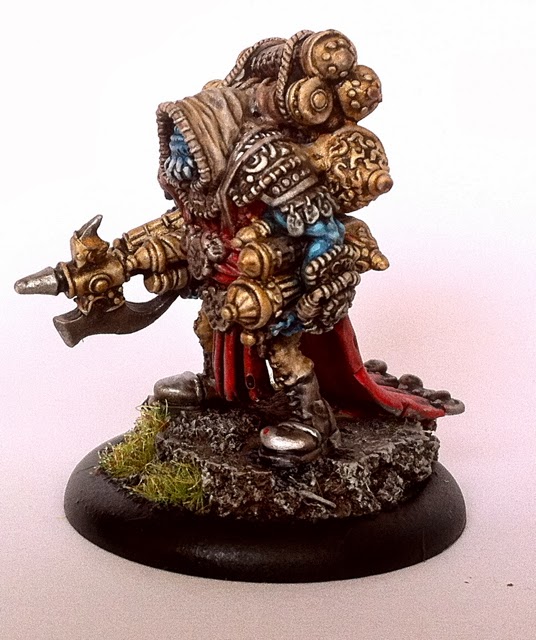 Posted by Circle City Miniatures Studio at 11:47 AM 1 comment:

I got to paint some 1980s or 90s-era Ral Partha D&D figures on commission recently.  It had been so long since I even handled such old-school figs that I had forgotten what they are like.  For one, they are so much smaller than the figs out there today.  There is still a lot of detail, but it's shallower and not as crisp as the current GW or Privateer press stuff.  As a consequence, trying to highlight with individual brushstrokes is basically impossible.  You need to use techniques like drybrushing and washes that let the paint to the work for you.

The specific models I painted are Ral Partha Vegepygmies -- a monster that first appeared ht the classic AD&D module "Expedition to the Barrier Peaks."  Painting these guys brought back memories of playing that adventure.  It was a was in intrusion of Sci-Fi in a fantasy realm, and I remember there was a separate picture book in the module for the GM to use and show the players pictures of what they were facing.  Good times ...

Anyway, the Vegepygmy models were in 3 poses.  There is a version with a club and 2 versions with spears.  Here's what they look like up close: 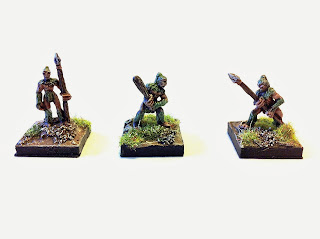 The models have integral bases cast as part of the figure.  The client wanted them on 20mm square bases, so I glued them on to bases provided by the client, and built up the area around the integral bases with texture to make it seamless.  Here's the whole set of 56 together: 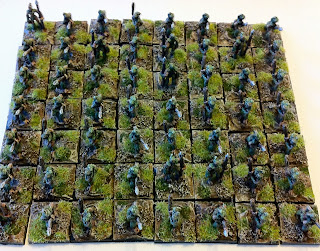 Posted by Circle City Miniatures Studio at 1:45 PM No comments:

I've had a Citadel Wood sitting around for so long I don't even know where I got it.  I think it was a prize from a Warhammer tournament ages ago.  Anyway, I figured I would paint it up.  I was pleasantly surprised how good it looks.  It's a quality piece of terrain I would be happy to have on my gaming table.  However, I play at a store that has terrain, so I don't really need terrain myself ... so it's off to eBay in a few days.  Here are some pics: 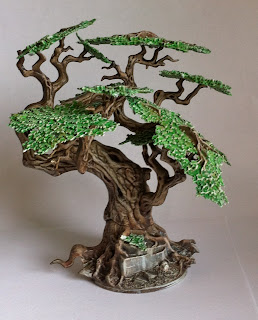 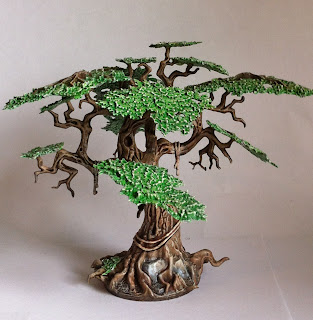 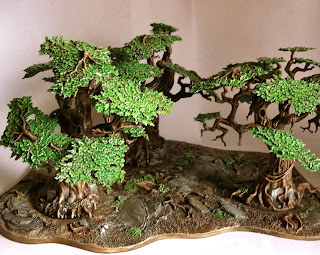 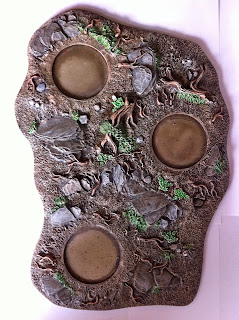 Posted by Circle City Miniatures Studio at 3:47 PM No comments:

In the run-up to Buckeye Battles, I was more worried about painting than posting.  But today I snapped pics of a couple units that I haven't posted before.  First are my Saurus Warriors.  I was trying to crank them out and got them done on Wednesday before the tournament after about a weeks worth of evenings.  All pics were with my new phone, and I am getting a very pronounced purple/pink in the background even though it is actually pure white ... 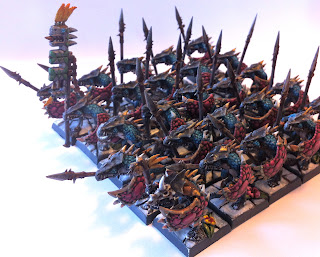 Next are a couple pics of my Skink Priest.  Cranked him out on Thursday (left for the tournament on Friday night). 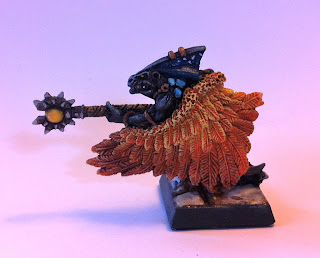 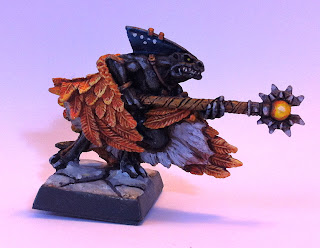 Next is my Salamander.  It was actually done some time ago:

Finally, one more Cold One Cavalry model, just because I love these guys. 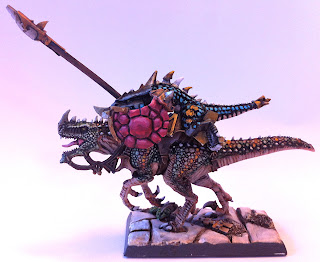 Posted by Circle City Miniatures Studio at 7:36 AM No comments:

Still doing some work on Saurus Warriors that aren't done yet, so I thought I would snap some pics of my second Terradon unit.  I did the mounts in a different color scheme that my first unit (look for them in an earlier post) so they are easier to keep track of on the battlefield.  But the basing style and the riders are done the same way, so they still look like they belong to the same army.  Pics are from my phone but they still turned out. 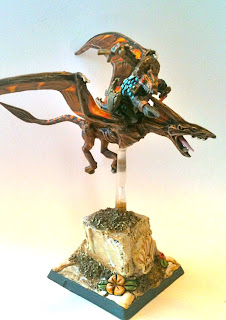 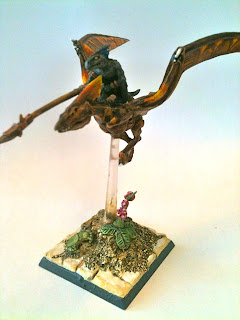 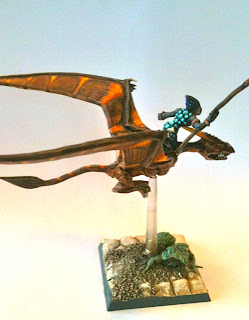 Posted by Circle City Miniatures Studio at 9:24 AM No comments: